Blog Posts for arts and military 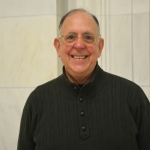 Designed by Harvey Pratt (Cheyenne and Arapaho Tribes of Oklahoma), the National Native American Veterans Memorial is located on the grounds of the National Museum of the American Indian on the National Mall and was commissioned by Congress to give all Americans and our international visitors the opportunity to learn more about the proud and courageous tradition of service of Native Americans in the Armed Forces of the United States. As a tribute to Native heroes, this work of public art recognizes, for the first time on a national scale, the distinguished service of American, Alaska Native, and Native Hawaiian veterans in every branch of the U.S. military. Given that Native Americans have a long history of service dating back to the Revolutionary War, and also serve at the highest per capita level of participation of any demographic, it is especially appropriate (and it’s about time!) for Native American veterans to be honored with this memorial. Public art in the 21st century is playing a key role in creating meaningful places for gathering and contemplation. Many memorials created in the not-so-distant past are figurative statues of heroic and historical figures. By contrast, both the Vietnam Veterans Memorial and the National Native Americans Veterans Memorial are abstract works that are meditative in tone and rich in symbolism. The National Native American Veterans Memorial also serves as a place of reverence and honor, a commemoration of people who served with honor, and a site of celebration. 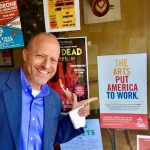 The effective arts advocate needs to articulate the value of the arts in as many ways as possible—from the passionately inherent to the functionally pragmatic—and to deploy the right case-making tool in the right moment. Consider these “10 Reasons to Support the Arts” as your Swiss army knife for arts advocacy. It can feel intimidating Zooming with, or walking into, a legislator’s office—even to experienced advocates. To always feel prepared, I break the advocacy process down into three questions: Who gets the message? What is the message? and, Who delivers the message? When you are preparing your case for the arts, remember The Golden Rule: No numbers without a story, and no stories without a number. The arts are all about stories—often small, always meaningful. Share yours. It is engaging and draws your listener in—and then pair it with the research-based findings in “10 Reasons to Support the Arts.” Yours will be an advocacy visit that is not soon forgotten!

Strengthening Mental Health through The Arts (Including Mine!)

Americans are stressed—the COVID-19 pandemic, racial injustice, polarizing politics, remote learning for students, unemployment, a fragile economy—so it is no surprise that mental health issues are spiking across the country. The U.S. Census Bureau reports that one-third of the population is showing signs of anxiety or depression—a tripling over just the previous year. The Kaiser Family Foundation reports that nearly half of Americans believe the pandemic is harming their mental health. As community leaders seek to maintain the wellness and mental health of their residents amidst challenged budgets, new research shows the arts are an effective resource in reducing depression and anxiety and increasing life satisfaction—improving both quality of care and the financial bottom line. The arts are a proven contributor in keeping us mentally healthy, helping us heal when we are not well, and reducing healthcare costs. The NEA as well as local and state arts agencies support arts programs that address a vast array of mental health and personal well-being issues. With those benefits, it is no wonder that 73% of Americans favor government funding for arts in healthcare programs and 68% of Americans agree that the arts improve health and the healthcare experience.

Five Views of the Healing Power of the Arts

This week, Americans for the Arts is sharing the diverse arts and health experiences of five Assistant Scholars and Lecturers at the UF Center for Arts in Medicine in Gainesville. You will read of the joint experience of both patient and artist, the benefits of storytelling among children engaged in a journey of treatment, and the challenge of shaping healthy lifestyles among teenagers with theater, as well as two stories of the arts and healing for Veterans.

Read More
TAGGED WITH:
arts and military
arts and healing
social change
Florida
National Initiative for Arts and Health in the Military
connect

“To My Fellow Combat Veterans”

I taught theatre in Lee’s Summit, MO for many years and had the privilege to work with many wonderful students. One of them I truly treasured was Richard Gibson, who went on to enlist in the Marines after high school and serve his country with honor. Richard wrote a letter in response to the budget situation facing the Missouri Legislature this year. From his words, I hope all elected officials realize the value of the arts in education. Adequate funding for schools keep arts programs alive. Public investment in arts agencies allows institutions in large cities and rural communities alike to provide arts opportunities for their citizens.

VSA Texas works with people with disabilities as they access the arts. This can be as a patron of the arts or as an artist. Through our Artworks: Creative Industries program, we meet artists where they are in their hobby or career and act as a resource to move them to where they want to be in that hobby or career. My challenge is to find out what the barriers are for our artists and find ways for each of them to work through those barriers to reach their personal goals. In 2009, we noticed a barrier for Veteran artists within our own services. Veterans in our community were not identifying as artists with disabilities, so they were not entering our art exhibitions or attending our workshops and events. Rather than trying to change their viewpoints, we adapted ours and started programming specifically for Veterans.

Read More
TAGGED WITH:
arts and military
National Initiative for Arts and Health in the Military
arts and healing
Texas
connect