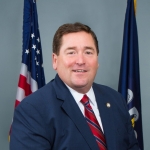 The 54th Lieutenant Governor of Louisiana, Billy Nungesser was elected in 2015 and took office in January 2016. Nungesser was moved to enter politics by the slow response from government following Hurricane Katrina. He left his business career and ran for Plaquemines Parish President in 2006 and was re-elected in 2010 with over 70% of the vote. When Plaquemines Parish became ground zero for the nation’s biggest environmental disaster, the Deepwater Horizon oil rig explosion in the Gulf of Mexico, Nungesser became the voice of Louisiana’s frustration. During that crisis, The New York Times named him the “hardest working man in Louisiana” and ABC named him Person of the Week.

How has climate change and climate-related disasters impacted your district’s arts and culture community?

Louisiana is on the forefront of climate change in the United States. The frequency and intensity of storms are increasing. Coastal land loss is increasing. More inland, cycles of drought and extreme precipitation is increasing. For every temperature degree warmer, we are seeing 7% more water falling from the sky. As a result, we are seeing more flooding.

Migration away from the coast is generally not coordinated, but there have been a few cases of assisted relocation. One example: in 2016, Louisiana was awarded $48.3 million in Community Development Block Grant funds to work with residents of Isle de Jean Charles to move them into a safer community while preserving their culture.

How has the local arts and culture community in your region addressed climate change?

The Louisiana Folklore Society began the Bayou Culture Collaborative (BCC) in 2018 to provide a means to connect those interested in the human dimension, especially the impact on our culture. The Louisiana Division of the Arts Folklife Program participates by funding Passing It On workshops to help support south Louisiana traditions/culture and Sense of Place and Loss workshops to help the arts and culture network become more informed. In 2020, the BCC began offering monthly online gatherings to facilitate informing the public and networking. It is developing a position statement about supporting the human dimension of climate change.

The Folklife Program’s focus on how the arts can address climate change has highlighted arts organizations and artists that address the issue. Most significantly is A Studio in the Woods artist residencies for the past decade. Louisiana is home to several artists that have been recognized for their work on the issue, including Monique Verdin, Brandon Balengée, and several others. The Louisiana Division of the Arts’ Arts Summit featured Xavier Cortada in a panel on addressing coastal land loss and sea level rise. Cortada then met with the Regional Arts Council directors. The next year, Cortada returned as a keynote speaker. Several arts organizations have also addressed the issues in New Orleans and Lafayette. This topic is becoming more and more prevalent at arts and culture related conferences. Louisiana Division of the Arts Folklife Program Director Maida Owens has become more and more involved with speaking at conferences and helping to raise the awareness of how climate changes are affecting the arts and cultural resources in Louisiana.

What can federal, state, or local lawmakers do to help effectively prepare for and respond to the rise in natural disasters?

The federal government needs to respond more quickly and allow local municipalities and the state to spend FEMA money in the best way to rebuild their communities. The way FEMA is set up now, it seems to waste time and money after a disaster. A great example would be for a state to have a temporary housing plan in place. It would save the federal government money. We should be able to enact that and not wait six months to a year for a FEMA trailer that costs well over $200,000. If a state wants to purchase a camping trailer that will suffice until a person gets back in their home—and save the federal government money, in many cases over 100% of what they will spend on a FEMA trailer that may or may not arrive in the first year—there should be a way to do that and quickly help those in need. This is just one example of how the federal government spends way more than they need, and response time is too slow. It needs to be directed to local and state governments to spend the money the best way they can to get their communities back quickly.

What environmental protections, disaster preparedness, or partnerships are you and your office creating?

In addition to participating in SouthArts disaster preparedness programs, Louisiana has Creative Relief, a statewide system to respond to disasters. Each regional arts council has a means to receive donations to support arts organizations and artists. Within the Division of the Arts grants department, conversations have begun around the topic of requiring some of the larger (according to budgets) arts organizations to have disaster plans in place as a requirement for eligibility. This may take a few grant cycles to implement. Arts councils have also provided arts activities at evacuation sites. Dialogues with the Governor’s Office are beginning concerning how to help artists and arts organizations that have to relocate and how to help communities relocate together in order to support community connections and culture.

This blog is part of a series of Q&As with federal, state, and local legislators about the impact of the climate crisis in their areas, how local arts and culture communities are addressing the issue, and how lawmakers can help their regions effectively prepare for and respond to the rise in natural disasters.